The Story of Crowhurst Christian Healing Centre, The Old Rectory, and The Divine Healing Mission

The story begins in 1905 when an Australian layman, James Moore Hickson, arrived in Britain.  He had been involved with the work of healing in the name of Jesus for some years and felt called by God to revive the Ministry of Healing in the Anglican Church.  With friends he founded the Society of Emmanuel.  Its aim was to bring together Christians who were in sympathy with the Scriptural practise of the laying on of hands with prayer for the sick in the name of Jesus Christ.

From the outset they acknowledged the need for prayer to form a strong wall of defence against the powers of evil by mutual united intercession.  A Prayer Circle Union was formed consisting of small prayer groups committed to intercession for the work.  Groups spread throughout the country and those unable to join a group through age or infirmity became lone intercessors the forerunners of our Home Intercessors of today.  The lone intercessors prayed at 6.00 pm every evening.

In 1908 Mr Hickson was invited to an interview with the Archbishop of Canterbury and from transcripts of the talks it is clear that the archbishop gave the work his blessing.

A third strand of the Society was to bring together in partnership the work of the medical profession and the ministry of healing through the laying on of hands.  The gift of medicine is also a gift of God.  In 1909 a hospice or home of healing was established close to Regents Park, London where two doctors worked in fellowship and faith with members of the Society for those who were sick.  Records show it bore a remarkable resemblance to the Crowhurst of today.  However the then British Medical Association threatened to strike off the doctors if they continued to support unqualified practice and the home was forced to close.
In 1919 James Moore Hickson set out on a World Mission visiting every continent in the world, holding services of healing and forming prayer groups wherever he went.  He returned home in 1924.

Sometime in 1925, Mr Hickson met the Rev. Howard Cobb and was invited to take a mission in Howard Cobbs church at Mill Hill, London.  Before it could take place Howard Cobb contracted sleeping sickness and was close to death.  While his church prayed, Mr Hickson laid hands on the sick man and within the day he began to recover.  During his period of convalescence Howard Cobb felt called by the Lord into the healing ministry.

The foundation of the Old Rectory at Crowhurst

Howard Cobb advertised to exchange his living at Mill Hill with someone who had a large Rectory.  A reply came from Crowhurst and in 1928 he became Rector of the village church whilst taking in guests in need of restoration and healing at the Rectory.  He soon discovered that it was impossible to do both jobs, so in 1930 he resigned as Rector and with his wife, May, bought the Rectory and gave himself full time to the work of healing.  By June 1930 with incredible speed, a new wing, the present rooms 9 and 10, had been built and the Old Rectory was formally opened with Mr Hickson giving the address.  At the closure of the original home Mr Hickson said the work started in the name of God can never be stopped by man. Now he saw the fulfilment of his vision.  Howard Cobb borrowed over £9000  (a great deal of money at that time) from the bank to finance the work but despite the depression of the thirties, followed by the second world war, through Gods gracious provision the money was paid back and the home flourished.  Howard Cobb died in 1950 and is buried in Crowhurst churchyard. 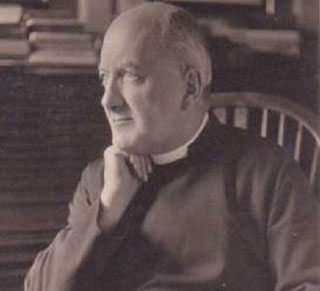 James Moore Hickson died in 1933.  The Society of Emmanuel had been formally disbanded in 1924 because it was believed its work had been accomplished.  The intention had always been not to form a separate society but for the churches to take on the work themselves.  Mr Hickson continued his healing ministry supported by the Prayer Circle Union and a magazine then called The Healer which he had started in 1908.  It continues to be published today as the Crowhurst magazine - `In His Healing Steps`.
Throughout his ministry he received no salary and had relied solely on the Lord to provide money for the work he did.  At his death a fund, known as the Divine Healing Ministration Fund, was set up to carry on the work.  The first formal acknowledgement and a Declaration of Trust were made in 1936 and the Divine Healing Mission was born.  By 1960 various other  funds involved in the healing ministry, such as The Prayer Union for Mental Suffering and the Prayer Fellowship formed by Godfrey Mowatt, were amalgamated with those of the Divine Healing Mission, and on 31 March 1960 a Declaration of Trust was executed over these funds by the Trustees, embracing all the various branches of the Mission.  In 1962 the Trusteeship of the Divine Healing Mission merged with the ownership and management of the Old Rectory, and a new Limited Company called the Divine Healing Mission (Holdings) Limited was formed.  This remains the official title of the charity of Crowhurst Christian Healing Centre today.  The objects of the 1960 Trust were based on the original objectives of the Society of Emmanuel.

When Revd George Bennett took over as Warden in 1958 the Old Rectory was in need of repair.  The story of its renewal is told in the book Miracle at Crowhurst.  His first task was to build a new wing, which was completed in 1962.  It soon became apparent that the tiny chapel was far too small and in October 1966 the present Chapel of Christs Glory was consecrated. George Bennett resigned as Warden in 1968 to take a wider ministry. God has supplied all our needs Throughout the years, the Trustees have always believed that God will supply all our financial needs. We have never been disappointed and there have been many miracles.  In 1996 extensive damage by Death Watch Beetle was found in the oldest part of the house.  But God was aware of our situation before it became plain to us. As only a few weeks before, we had been left a substantial legacy, which covered the entire cost of repairs.  We have many times proved the truth of the promise And God will meet all your needs according to His glorious riches in Christ Jesus Phil: 4.19.   Praise the Lord.

God has supplied all our needs